Hawaii is as beautiful as they say

Here I was on the island of Hawaii. As a young boy I heard romantic songs about it and I visualized it to be a paradise. I never would have thought that one day I would be able to visit Hawaii. Of course, I had known that over the years Hawaii had changed, but I was a little disappointed at what I saw in the island around the Honolulu area. It was so commercialized.

It was very early in the morning when our taxi driver took us to our hotel. We were still able to sleep for a few hours. Later we went sightseeing around our hotel area. You are in a completely different world, the sunshine and beautiful beaches and all the palm trees make you feel so good. The hotel we stayed in was very expensive. Just a very small breakfast was more than ten dollars per person. We strolled around the beach and saw many young people surfing. Large waves from the ocean were rolling into the shore. It was an interesting sight to see those young people jumping those waves with rowboats. The beach stretched out for miles around and was filled with sun bathing vacationers from all around the world. All of them will take home that Hawaiian sun tan later on. In front of our hotel alongside the beach was a large boulevard. It was so colorful with all those people strolling around doing window shopping in all of their fancy colored beach clothes. Hawaii is just a paradise for vacationers. 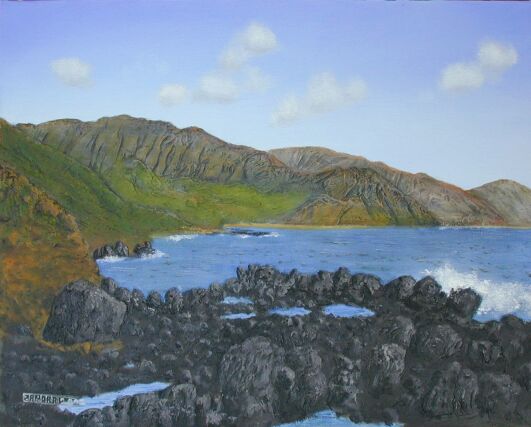 On my last trip to Holland an aunt of mine had given me the address of a cousin who was married to a Tahitian and lived for a while in Hawaii. His mother and mine were first cousins. I remember him very well, but we hadn't seen each other for more than 35 years. He had emigrated from Holland to Australia and later as a young man went with a merchant marine boat to Tahiti and stayed there. So we took a taxi and asked the driver to find his home. What I didn't know was that his house was only two blocks away from our hotel. The taxi took us all around before we got there. It was a great surprise for my cousin's wife when I told her who I was. They had just visited Holland a year ago and visited my mother's house. My cousin was not in at that moment when I visited but we made arrangements for them to visit us at our hotel room. At night they came to our hotel room and we drank Heineken beer and talked for hours about Holland and the family and what had happened to us over the years. It was early in the morning when they left and Lu Lu was already sound asleep. We made arrangements for the next day to have breakfast at my cousin Albert and his wife Rosita's house. after that they would take us sightseeing around the island. My cousin's house was a very small wooden house. He rented the house from some Hawaiian friends. In back of their house was a large coconut and bread-fruit tree. The fruits of the trees were well used by my cousin and his wife. My cousin's wife, Rosita, told me what all the different uses she made out of the coconut. Even some kind of medicine she made out of the coconut skin. Rosita should know since she had lived all her life on a different island. My cousin Albert was just like his wife and had accepted all the ways of her life style. He acted just like one of the natives from one of the islands. If all of them were together in his house and spoke in their native language, he also could speak with them. He had completely changed and lost all of his Dutch background. The few days I spent with them I noticed whenever they had their Hawaiian and Tahitian friends in their house Rosita was always reading fortune cards for them. I could tell that their lives are much involved in superstition.

After our breakfast Albert and Rosita took us around the island for a sightseeing tour. The weather was just beautiful. We took a taxi to the Honolulu bus station. Albert told me that for 50 cents we could ride all around the island, and it would be about a 150 mile trip. We rode all around the island and saw the beautiful sights of the beaches and mountains. Once you are far away from the city of Honolulu everything looks so different, and nature comes out, what you'd expect to see from this island. I saw the beauty of nature on this island with the palm trees and white sand beaches. I could have lived there the rest of my life. We visited the Hawaiian cultural center where they gave us a real show of the many ethnic groups of people and their way of life and dances. The show was very interesting with so many native costumes and the history of the people. We sat there in the sun watching the Hawaiian Hula dancers and all of us had a large coconut shell filled with ice-cream.

After we left the cultural center the bus drove us through acres and acres of pineapple, sugarcane and banana fields. For Lu Lu this sight was like being back in Burma again. For me it was the first time that I saw tropical fields like that.

CONTINUED: Flying from Hawaii to Hong Kong
< Prev   Next >