Myrtle Beach is a resort city with many miles of beautiful sandy beaches and a large number of tourist attractions. People travel here from far-away destinations to spend some time in the sun and swim in the Atlantic Ocean.

The ocean front of Myrtle Beach is lined with hotels, and one block away, the road parallel to the beach has the usual souvenir shops and restaurants found in most American seaside resorts.

Myrtles grow in abundance in Myrtle Beach, South Carolina. The trees are covered with flowers from June through July.

The main attraction in Myrtle Beach is the ocean and the white sandy beaches. Many people come here just to relax and spend some time in the sun enjoying the fresh ocean breeze.

There are many hotels facing the Atlantic Ocean, but rooms can be hard to find during the summer holidays, specially around the 4th of July.

Umbrellas along the beach

Many hotels have seaside swimming pools and gardens overlooking the ocean. All you need to do is step out of the hotel and you are at the beach.

There are lifeguard posts along the beach. The lifeguards carry two-way radios to stay informed about special conditions that may affect swimming, such as high tide, strong winds and rip currents.

Entertainment
Besides the ocean, there are many activities away from the beach, such as helicopter rides, miniature golf and an amusement park called Broadway at the Beach.

Broadway at the Beach

Broadway at the Beach is located at 1325 Celebrity Circle, Myrtle Beach, SC 29577, at the intersection of Route 17 and 29th Avenue North.

Upside-down building in Broadway at the beach

The park has restaurants, a cinema, an aquarium and many souvenir shops.

Hard Rock Cafe in Broadway at the beach

The Hard Rock Cafe in Myrtle Beach is shaped like an Egyptian pyramid.

Restaurants
There are plenty of places to eat in Myrtle Beach. In addition to the popular seafood restaurants, there are many ethnic restaurants that specialize in Mexican, Thai and Greek food.

Calabash is a small fishing town in Brunswick County, North Carolina, United States. Calabash was named after the gourds that grew in the region, which were used for drinking. Since the 1930s, the term "Calabash" has been used to indicate a regional style of fried seafood common in many eastern Carolina coastal towns. Myrtle Beach has a large number of Calabash style buffet restaurants since the city is just 25 miles (40 km) from Calabash.

Seafood features prominently in the menus of many restaurants. Some restaurants boast of offering 170 items in their all-you-can-eat buffets that include crab legs, oysters and other seafood while also providing pork ribs steaks and chicken for the land lovers.

A Mexican restaurtant serving authentic cuisine is the Fiesta Mexicana Restaurant at 410 70th Av. N., Myrtle Beach, SC 29572. The rice side dish was like what I remember eating in Mexico.

The Carolina Bays
South Carolina is also famous for its Carolina Bays in the Myrtle Beach area, although the office of tourism does not offer much information about them. The bays are shallow elliptical depressions, some of which are a mile long. The bays are hard to see from the ground. They were discovered after airplane flights became common. It is thought that the bays were formed from the impacts of ice boulders ejected when a comet or asteroid hit an ice sheet that covered the Great Lakes 12,900 years ago during an ice age. 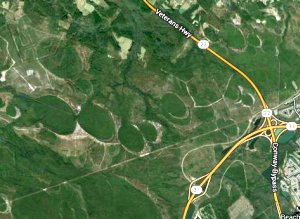 
Learn about the origin of the Carolina Bays.