How can you make flaky puff pastry?

Puff pastry consists of flaky layers of crispy bread. The flakiness is achieved by alternating layers of water-based dough with butter-based dough. Baking creates steam pockets that separate the layers. Sugar is not used. The following is the traditional French method of making puff pastry.

Mix 1/4 cup of flour with 14 tablespoons of cool butter to make a smooth paste. Shape into a square approximately 1/2 inch (1-1/2 cm) thick. Cover and refrigerate 30 minutes. Separately, mix the cold water, 2 tablespoons of butter, and the remaining 1-3/4 cup of flour (some recipes add 1/4 teaspoon of salt). This elastic, shiny dough is called a détrempe. Knead for about one minute. Cover and refrigerate 30 minutes. Refrigerating the dough relaxes the gluten and makes it possible to roll the dough without breaking it. On a lightly floured board, roll out the water-based dough (détrempe) to a thickness of 3/8 inch (1 cm). Place the butter dough square on the water-based dough and wrap the ends of the water-based dough to enclose the butter dough in an envelope (Figure 1). Roll out the dough envelope to 3/8 inch (1 cm) thickness and fold in thirds like a business letter (Figure 2).

Roll again in the opposite direction and fold in thirds again. Refrigerate 30 minutes and repeat the process twice for a total of six foldings. The number of layers triples every time that the dough is folded into thirds, so after six foldings there are 729 dough layers separated by a similar number of butter layers. The heat generated by rolling the dough tends to soften the butter and causes it to blend with the détrempe. The secret of good puff pastry is to work the dough while cold to prevent the butter and water-based dough from mixing thus retaining the layered structure. This is why the cooling periods are important. After the sixth folding, the dough is refrigerated once more, and then it will be ready for use for any recipe that requires puff pastry. NOTE: The oven must be preheated to a high temperature, usually 400° to 450° F, when the dough is placed in the oven. If the oven is not hot, the butter will melt and the moisture will evaporate before steam can form to separate the layers. You will end up with a tough non-flaky pastry.

Palmiers
Roll out the dough to a thickness of 1/8 inch (3 mm). Sprinkle the dough with granulated sugar so that the whole sheet is lightly covered. Roll two opposite edges of the dough toward the middle to make a log. Cut the log into slices about 1/4 inch (7 mm) thick. Place the slices on a cookie sheet spaced widely enough so that they will not touch each other when they expand as they bake. Bake at 425° F (218° C) for approximately 8 minutes until golden brown.

Napoleon
The Napoleon pastry is known as mille-feuille ("thousand-leaf") in France. It consists of several layers of puffed pastry alternating with pastry cream, although different types of fillings and toppings can be used.

Roll out the puff pastry dough to a thickness of 1/8 inch (3 mm) and cut into several squares that will fit on a plate. Place the squares on a baking sheet and pierce them with a fork at one inch intervals to keep the dough from puffing too much. Bake at 450° F (232° C) for approximately 7 minutes, or until the puff pastry is lightly brown. You may have to bake the pastry squares in different batches, depending on how many squares you can put on a baking sheet. Wait for the pastry to cool before adding the topping, and press the sheets as you build the layers. Refrigerate, and cut into serving pieces when it is cold.

Cream for the Napoleon
A nice filling and topping can be prepared easily by beating 8 tablespoons (1 stick) of softened unsalted butter, and adding one 14-oz can of sweetened condensed milk, two teaspoons of vanilla extract, and 3 tablespoons of cognac or brandy. Continue beating until smooth. The filling is spread between the layers and sprinkled with chopped walnuts.

Pastry Cream is also a good filling for Napoleon but it needs to be prepared in advance so that it can cool.

Pastry Cream Preparation:
In a saucepan, bring the milk to a boil over medium heat. Meanwhile, whisk the egg, egg yolk, vanilla, sugar and cornstarch together in a medium bowl. Add the boiling milk to the egg mixture in a thin stream while whisking so that the eggs don't curdle. Return the mixture to the saucepan and slowly bring it to a boil while stirring constantly to prevent scorching on the bottom. Boil for a few seconds until the cream thickens, and remove from the heat. When lukewarm, add the butter and brandy, and mix well. Transfer to the bowl, cool to room temperature and refrigerate. 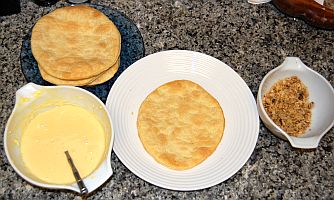 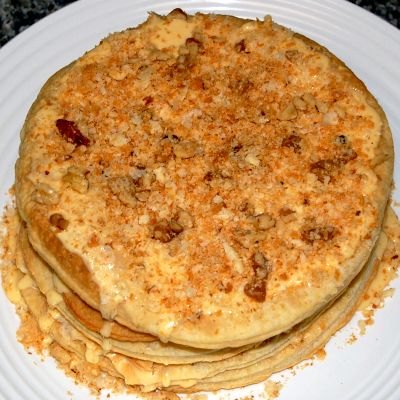 The images above show puff pastry that has been cut in a circular form using a small plate as a guide. The trimmings have been baked and crumbled, and mixed with chopped walnuts to be used as topping and filling between the layers.

Turnovers
Roll out the dough to a thickness of 1/8 in (3 mm), cut into 4 inch (10 cm) squares, place a spoonful of fruit preserves in each square and fold diagonally, pinching at the edges to create turnovers. Before folding, moisten the edges of the square so that they will stick together when pressed with a fork. Pierce the turnover with a fork to allow steam to scape while baking. A rich golden color can be obtained by brushing the pastries with egg before baking. Bake at 400° F (205° C) for approximately 20 to 30 minutes until lightly browned. 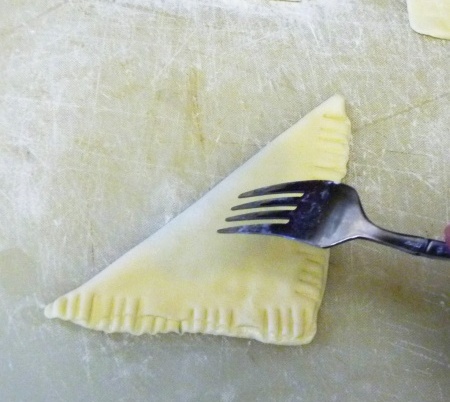 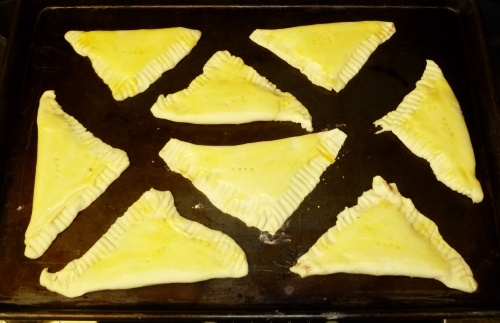