How I ended up in Syracuse instead of Milwaukee

Furniture and everything else was just rolling left and right on the upper deck of the boat. Finally the storm stopped, but we were days behind our schedule to arrive at New York. Many passengers on ship were very seasick, especially the older people who didn't eat for several days. The remaining days on the ship were very smooth. I noticed with all this stormy weather the seagulls and dolphins were still following the ship as they had done all the way from Rotterdam. The last few days we spent most of our time outside on the deck, as we had spent too many stormy days inside the cabin. We knew that the coastline wasn't that far away anymore. After twelve days on the Atlantic ocean we finally sighted land. It was a good feeling to know that we made it as most of us would never take a trip like this again. As the ship came closer to the shore, from far away we could see the city of New York. The first clear picture we could take from the boat from America was the Statue of Liberty. 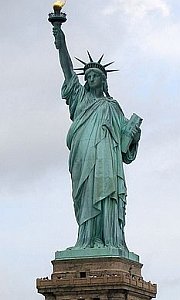 After we passed the Statue of Liberty our ship stopped as a small boat of emigration officers appeared. The emigration officers came on our ship and checked certain things and the passenger list. After that the ship could proceed to the harbor of Hoboken. We all stood on top deck of the ship as we took pictures and watched the city of Manhattan getting closer and closer to us. Far away in the background we could see the colorful cars on a large boulevard passing by. Everything looked so big and rich. Where I came from I never saw any large buildings like that. As we came to the harbor the bigger and busier this city became. There were so many new things to see for me that I forgot all about our stormy sea trip. Somehow I was happy that I had arrived in America, but on the other hand I felt a little scared and uncertain about what was going to happen to me. I was looking at this city of Manhattan with all those large buildings and all those people. I was not used to this, and it changed my whole picture of what I thought America would be.

Once the ship docked in the harbor of Hoboken, we were told that nobody was permitted to leave the boat until the emigration service would give our legal traveling papers, and that would be the next day.

Since we had arrived in America and after such a lousy crossing of the ocean we didn't have much patience staying on this ship any longer. We knew that we couldn't go too far away from the ship, as we were told to stay on the ship until we would get our traveling papers. That night, I and some single men sneaked into one of the bars in the harbor of Hoboken with the help of one of the seamen who got us off the ship. It was very close to where our ship was docked. We had several beers (ten cents a glass) and there were some good looking girls around. I was sitting on the bar and a girl very close to me was very friendly. I tried to converse with her, although my English was very poor. Luckily the owner of the bar was a Dutchman and helped us in our language struggles. The owner told us that he had left Holland forty years ago. He came from the city of Amsterdam, and when he spoke Dutch to us you could still notice his Amsterdam dialect.

I offered the girl next to me a drink and we tried to converse with each other. Then not long after that another girl came in and started an argument with the girl who was sitting next to me. The argument became very heated, and the girl next to me was slapped several times. I felt very uncomfortable, but the bar owner told me not to worry as both women were lovers. This was my first experience with lesbians. What made the other girl so angry was, she walked into the bar and saw her girl sitting next to me. She became so jealous that she could not control her temper. After spending several hours in the bar, we went back to the ship again. Nobody ever found out we left ship that night. The way I felt when I came back to the ship, I couldn't have cared less.

The next day the Catholic emigration service people came on the ship and gave us all our legal entry papers and traveling tickets. When I was given my papers I was told things were changed and instead I would go to Syracuse, New York. At the first moment when they told me so I was very disappointed. I had no idea where Syracuse, New York was, and the first thing I thought was that I was going to stay in that big city with all those skyscrapers. I never heard such a thing in Holland that there was a State of New York, and I never heard about Syracuse.

When I asked one of the emigration service people why I was not going to Milwaukee, Wisconsin as I was promised in Holland at the consular office of the American Embassy, they shook their heads and said those were the papers they had for my destination. So I had no choice and did what they told me to do. One of the Catholic emigration service people took four of us to the Central train station where she put us on a train that went to up State New York. Each of us was going to a different city. It was a long train ride with several stops, and it took eight hours to arrive in Syracuse. My sponsor was supposed to meet me at the train station in Syracuse. It was midnight when I arrived. The train conductor was given instruction to see to it that I would get off the train in Syracuse. When I got off the train and I was looking for my sponsor a young man came up to me and asked me if I was Jeff. I said yes, then he told me that my sponsor was not able to come to the train station because he was sick in bed. The young man introduced himself as Frank Westers and lived with three other Dutch boys in an apartment. They all had just arrived a few months earlier and were sponsored by the same man who sponsored me. I was going to share their apartment until my sponsor would find a job for me.

CONTINUED: Trying to find work in America
< Prev   Next >